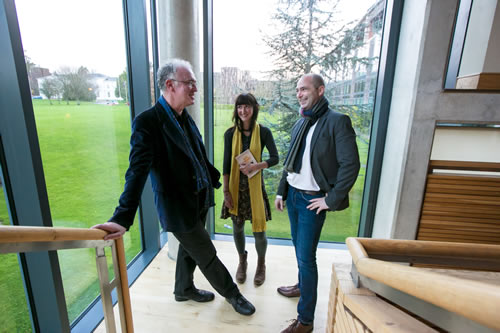 UL One Campus, One Book now in its third year, is a University of Limerick initiative, led by the Regional Writing Centre and the Centre for Teaching and Learning, encouraging all members of the campus community, students and staff, to read the same book and talk to one another about that book during the academic year.

Sara, author of Spill Simmer Falter Wither, spoke about her delight at being this year’s chosen author for the academic year, “It just makes me smile so much to think of myself talking to a crowd of people who care and want to listen, and I would never dream that it would reach so many people and generate such a warm response”.

Sara Baume’s debut novel won The Rooney Prize for Irish Literature for 2015 and was long listed for the Guardian First Book Award.
Professor Joseph O’Connor, whose novel The Thrill of it All was featured for last year’s UL One Campus, One Book, introduced Sara at the launch, saying, “I was just blown away by the book.”

Donal Ryan, Writer-in-residence, UL, was also present at the launch. His novel, The Spinning Heart, was the first featured novel for UL One Campus, One Book in 2013/14.

Dr. Íde O’Sullivan, Co-Director Regional Writing Centre, spoke at the beginning of the event, saying, “Its aim is to bring members of the campus community together to share in the joy of reading.”

The next UL One Campus, One Book event will be a discussion on visual and literary art in spring 2016, where Sara will talk about the influences on and relationships between her writing and visual art.

There will also be a How I Write, Ireland interview by Lawrence Cleary, Co-Director, Regional Writing Centre, later in the year, discussing Sara’s writing processes and strategies.

All three UL One Campus, One Book authors are nominated in this years’ Irish Book Awards 2015.