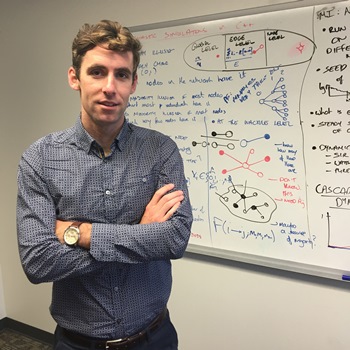 An Irish researcher is using maths to discover how information, behaviour and trends spread through social networks and is finding unusual applications for his work including on the streets of Los Angeles.

Last year, there were nine recipients of the prestigious fellowship worth $200,000, only three of which went to applicants from outside of the United States. Peter was the only successful Irish applicant.

This grant gave Peter, who is from Ballincollig, Co. Cork, the opportunity to work in any institution in the United States. He has recently taken up his Fellowship at the University of Southern California in Information Sciences Institute led by Professor Kristina Lerman.

Professor Lerman is an expert in social media and network analysis and machine learning. Her research has been featured in top scientific publications as well as Forbes Magazine, The New Yorker, Harvard Business Review and MIT Tech Review.

"During my PhD, I studied mathematically how phenomena spread through networks - groups of interconnected units - using tools such as mathematical modelling, calculus, statistics and linear algebra. Now I am applying these methodologies to study different types of spreading behaviour in social networks," Peter explained.

Only weeks into his fellowship, Peter is finding interesting applications of his work.

“I had a meeting last week with people involved in social work. The reason their work is relevant to me, and vice versa, is because they are working with networks of homeless people here. The people are interconnected through friendship and peer relationships, and the challenge for the social workers is how can they influence these networks?” he outlined.

“Many of the people in this network have addiction problems, so the social workers want to spread a good behaviour, like rehabilitation. We have to examine how to do that in the most effective way. People are influenced by their connections so if you can spread a behaviour in a social network it can be more effective than trying to introduce it from the outside,” Peter continued.

“It is a classic problem in network science, who is the best person or node to seed or to start the spread of a good behaviour. If you focus your attention and resources on them, the behaviour can spread efficiently through the network,” he added.

Peter’s work could ultimately revolutionise the modelling of human behaviour. It will build upon the work conducted during Peter’s recently completed PhD thesis, which was supported by Science Foundation Ireland (SFI), on the Stochastic Dynamics on Complex Networks under the supervision of Professor James Gleeson, Chair of Industrial and Applied Mathematics and co-director of the MACSI research group in UL.

“I am delighted to have been awarded such a prestigious fellowship and I am excited to have the opportunity to carry out research in the area of computational social science which is a very rich area of research,” Peter said.

According to Professor James Gleeson, “Peter’s award demonstrates that the SFI-funded research being carried out in MACSI and in the University of Limerick is at the cutting edge of applied mathematics research and has significant societal and scientific impact”.