Pint of Science is coming to Limerick!
This was a worldwide event where Scientists doff their white coats and headed to the pubs to tell their research tales. Limerick was one of 50 cities in eight countries taking part in the world-wide event. The aim of Pint of Science was to deliver science talks in a fun, engaging and approachable way by bringing them to a relaxing public space – the local pub. The idea is to invite people to sit back, drink, listen and engage with the scientist presenting … over a pint.

Limerick’s event, which was organized by the University of Limerick, took place in The Locke Bar on Monday May 18th May (7-9pm) and in the White House Bar on Tuesday May 19th May(7-9pm). The talks covered Health, Environment and Technology with topics including; Computers dreaming of electric music; Contagion; Brains R Us; Mathematics of Brewing Coffee; Bringing Maths Eyes to the masses; and Flying to the moon. Following the talk a question and answer panel discussion was opened up in the pub at the end of the night. 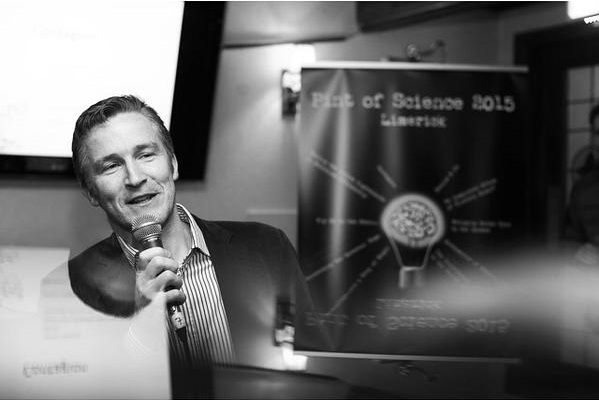 Prof James Gleeson spoke on “Contagion” on Monday night (in The Locke Bar), Dr William Lee spoke on the “Mathematics of Brewing Coffee”.

Problem Solving with Industry ESGI 110 28th June - 3rd July 2015
Minister for Skills, Research & Innovation, Damien English addressed the group on the first day of the week-long intensive problem-soliving challenge for industry. Appliedmathematicians from around the world spent the week working on real-world problems that companies presented. We are pleased to announce that MACSI's problem solving workshop with industry will

The 2nd Stent Workshop 4th September 2015
Dr Tuoi Vo organised a one day workshop "Next generation medical stents: scoping the future" at the University of Limerick. The workshop was very successful: there were about 40 participants including modellers, cardiologists and experimentalists from Ireland, the UK, France, Italy, Portugal and the USA and industrialists from Boston Scientific, Medtronic and Veryan Medical (Ireland), CBSET (USA), Instent (France) and Vascular Flow Technologies (UK).

FameLab
The first FameLab event for MACSI took place during Maths Week on Wednesday 14th October. Presentations were judged according to FameLab's "3Cs"; Content, Clarity and Charisma. On the evening the winnes was Gary O'Keeffe.

Workshop on “Nonlinear Waves in Stratified Flows” 05-06 November at the University of Limerick.
This was a small and very dedicated workshop that brought together approx 10 researchers with expertise on internal waves in the atmosphere and ocean.