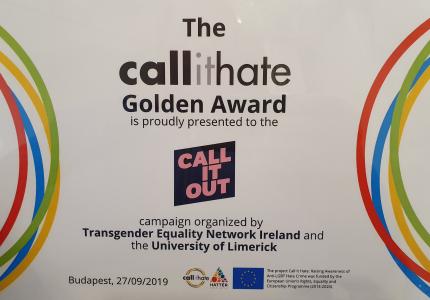 Call It Out, the Irish LGBT+ public awareness and education campaign, placed first among 10 participating EU partner countries. The European 'Call It Hate' Golden Award was announced at the Call It Hate conference in Budapest.

The campaign was a joint intiative by the Transgender Equality Network Ireland (TENI) and the HHRG. It set out to empower LGBT+ people to 'call it out' when met with hate and hostility and to raise awareness amongst the cisgender, hetersexual population asking them to also seek help in combating harassment and violence against LGBT+ people.