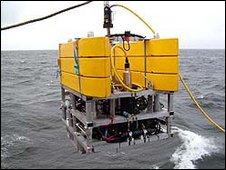 The ROV had a payload including high resolution imaging (multibeam and sidescan) sonar and precision navigation systems from MMRRC at UL. Dan and his team spent eight days at sea for system integration, and trials on this shake down survey. UL high resolution imaging sonar, precision navigation systems and top side augmented reality survey support tools were integrated and trialled on the National ROV Holland 1 in advance of a science led survey of Cold Water Coral Habitat at the edge of the Porcupine and Rockall Banks.