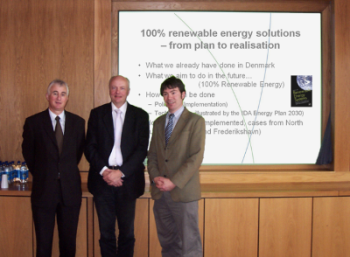 With regard to the implementation of renewable energy systems, Denmark has become an interesting case. The renewable energy share of primary energy supply has increased from around zero in 1972 to 16 per cent in 2007 and wind power has become equal to a 20 per cent share of the electricity demand. Moreover, Denmark has started to produce oil and natural gas from the North Sea and is today more than self-supplied with energy. However, the Danish oil and gas resources are scarce and are likely to last for only a few decades.

An interesting question is therefore, can Denmark convert to 100 per cent renewable energy within a matter of decades or will we have to return once again to former days of dependency on import of fossil fuels? Such question is indeed relevant not only to Denmark, but to Europe in general as well as the US, China and many other nations around the world. According to the Danish Government, Denmark is to become completely independent of fossil fuels, such as coal, oil and gas. Denmark shall convert 100% to renewable energy. This is the long-term goal. But how can society reach such goal.

The idea of the lecture is to unify and deduce the learning and results of a number of separate studies and thereby contribute to a coherent understanding of how society can implement Renewable Energy Systems. The presentation is based on 25 years of involvement in a number of important and representative political decision-making processes in Denmark and other countries. As we shall see, these processes reveal the lack of ability of organisations and institutions linked to existing technologies to produce and promote proposals and alternatives based on radical changes in technology.  On the other hand, the Danish case shows that the ability to act as a society has been possible despite conflicts with representatives of the old technologies.

Prof. Brian Fitzgerald, VP Research at the University of Limerick, Prof. Henrik Lund, University of Aalborg and Editor-in-Chief of the Journal 'Energy' and Prof. Martin Leahy, Director of CPI at the presentation by Prof. Lund on "The Choice and Modeling of 100% Renewable Solutions" and the launch of his book "Renewable Energy Systems".

M.Sc.Eng., Ph.D., Dr.Techn. Henrik Lund is professor in Energy Planning at Aalborg University in Denmark and Editor-in-Chief of Elsevier international jounal ENERGY. He holds a PhD in "Implementation of sustainable energy systems" (1990) and a senior doctoral degree in "Choice Awareness and Renewable Energy Systems" (2009). For more than 25 years Henrik Lund has taken an active role in Danish Energy Planning and Policiy making in political dicussion on specific investment decisions as well as in the technical design of concrete future energy alternatives. The latter has included the development of theories, metthodologies and tools for the technical design of renewable energy systems. Henrik Lund is the author of the new book "Renewable Energy Systems  -  The Choice and Modeling of 100% Renewable Solutions" being publish by Academic Press/Elsevier in October/November 2009.