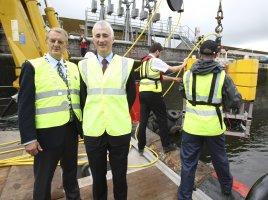 Limerick Docks were explored by Limerick's very own 'yellow submarine' last Thursday with the launch of a new advanced submersible by the Mobile & Marine Robotics Research Centre at UL. ROVLatis, is the first such vehicle designed, built and tested in Ireland. At a cost of €1M, ROV Latis has been developed for ocean exploration, high-resolution seabed mapping, marine environment monitoring and operations supporting roll-out of Ocean Energy Devices. It is designed to operate from the beach  out to the edge of the continental shelf at depths of 1,000m and more.

The smart technologies deployed on Latis are cutting edge, breaking new ground with advanced integrated control systems incorporating auto-pilot, fault-tolerant thruster control and Pilot aiding tools/simulation for practice / training of complex operations prior to execution in the real world.  The vehicle is equipped with the latest in sidescan and multibeam sonar and vision-based navigation with patented data capture from several acoustic devices simultaneously. Featuring capabilities normally only found on much larger ROVs, Latis' smaller footprint allows it to be deployed more cost effectively from smaller inshore vessels.

ROV Latis is designed to function down to depths of 1,000m plus

The centre's director, Dr Daniel Toal, explained that the submersible is the culmination of many years of work by the team (currently has nine researchers, a including post-doctoral and PhD students. With this world leading Smart ROV we now look forward to the ocean challenges ahead in deployment of ROVLatis.

UL Vice President Research, Professor Brian Fitzgerald, who launched the submersible with Deputy Mayor, Denis McCarthy, said that it was wonderful to see the culmination of research efforts by this group, the only Underwater Marine Technology Research Centre in the Irish University sector. The international market for new research and development in sub-sea technologies is large and growing, and the scientific, offshore energy and military sectors have all shown considerable interest in the innovations developed by the MMRRC, he said. in collaboration with partners in marine archaeology, ocean monitoring and protection, and in support of off shore energy sector development.  With considerable commercial interest already shown in our mission support technologies prospects for the future look bright.