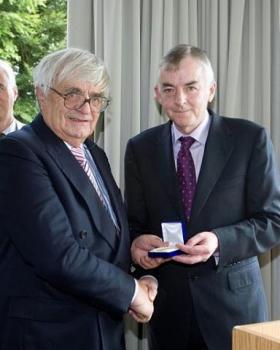 Professor Michael Hayes a widely respected organic chemistry expert and Executive member of the Charles Parsons Initiative has been honoured at the University of Limerick today as a recipient of the President's Medal presented to him by Professor Don Barry, UL President.

The UL President's Medal was established in 2002 to honour individuals who have provided outstanding support and service to the University of Limerick.

Professor Hayes' research has focused on humic substances in Irish soil and the study of biomass as a replacement for fossil fuels. Professor Hayes, who celebrated his 80th birthday this year, currently co-ordinates a major international project, DIBANET, led by UL, which explores the production of sustainable biofuels in Europe and Latin America. He and his research team envisage a future where energy and chemical needs can be met by sustainable sources and has identified the huge potential for biofuel production in Ireland.

Speaking from today's ceremony UL President Professor Don Barry commended Professor' Hayes' dual commitments throughout his career to the pursuit of ground breaking research and the education of his students. "Michael Hayes not only has an impressive research record as well as many years of inspiring teaching to his credit, but also possesses an enthusiasm and energy that are an inspiration to his colleagues and peers.  His research and interests have brought him across the globe, and on reaching the milestone of his 80th birthday this year, he is thankfully showing no signs of slowing down.," said Professor Barry.

Michael Hayes, who was responsible for bringing the Harvard and Yale combined Athletics teams to UL three times since 1999, was also commended today for his contribution to Athletics at UL. "His continued commitment to athletics at UL is a testament to his dedication and enthusiasm for the wider student experience.  Michael champions the importance of developing both social and intellectual skills to compete and strive for excellence both on and off the field," said Professor Don Barry.