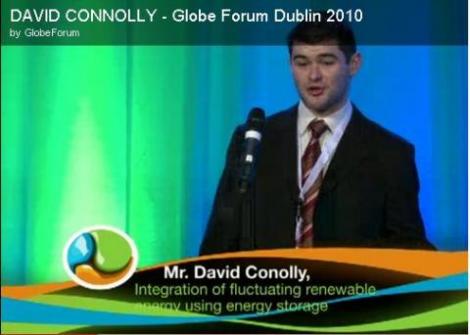 The award was open to all individuals who are currently completing or have completed a PhD in the last 5 years in relation to sustainability i.e. energy, health, food, etc.

The first step of the competition was an application process where each entrant outlined the impact of their research in relation to sustainability, innovation, and society, along with a detailed description of their research team, project and most notable outputs. This was followed by a semi-final where 6 participants were chosen to present a sixty second pitch each about their research at the Globe Forum conference.

After David completed his sixty second pitch, he qualified as one of two finalists. David then completed a five minute questions and answers session about his work with the judging panel after which, they announced him as the overall winner.

David was then presented with an award by the former President, Mary Robinson and the prizes include €600, an Apple iPad, a mentoring programme to help commercialise his ideas including a €5000 PR consultancy package, and an all-expenses paid trip to the next two Globe Forum Conferences in Stockholm and Eindhoven in 2011.

During the course of his PhD, he has developed and commercialised a new software tool in collaboration with Atlas Computers Ltd. (www.atlascomputers.ie), which identifies suitable locations for the construction of PHES. This software has already been used to search two counties in Ireland for freshwater PHES, where 10 suitable sites were identified. Also during his research, David Connolly developed the first model of the entire Irish energy system. This model simulates the electricity, heat, and transport sectors of Ireland over a one-year timeframe on an hourly basis. It was created using the EnergyPLAN software which was developed at Aalborg University in Denmark (www.energyplan.eu). Using this model, David Connolly has examined the wind penetrations feasible in Ireland with additional PHES, the economics of constructing PHES with wind power, the design of electricity markets for PHES, and the feasibility of a 100% renewable energy system for Ireland.