Decriminalisation Then and Now | University of Limerick

Home » Decriminalisation Then and Now
Print

Decriminalisation Then and Now

The Hate and Hostility Research Group is delighted to invite you to the latest in its ‘Academic Meets Activist’ series of events, which marks the 25th Anniversary of Decriminalisation in Ireland, also looking at the struggle for decriminalisation in Jamaica. 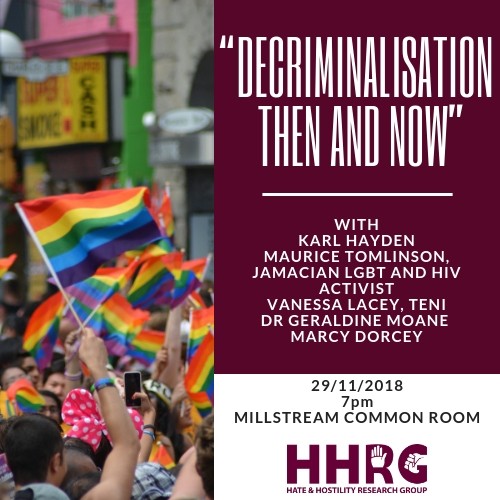 The evening consisted of a panel discussion with Maurice Tomlinson, Karl Hayden, Vanessa Lacey, and Dr Geraldine Moane. The panel talked about the impact of the so-called ‘anti-sodomy’ legislation on the LGBT community, as well as contemporary issues facing the community in Ireland today.

The HHRG were privileged to have Maurice Tomlinson join the panel, speaking about his own campaign for decriminalisation in Jamaica, where he is both counsel and claimant in a case currently pending before the Jamaican Supreme Court.

Maurice Tomlinson is a Jamaican lawyer, gay rights activist, and educator. He is a senior policy analyst with the Canadian HIV/AIDS Legal Network where he acts as counsel and/or claimant in cases challenging anti-gay laws before the most senior tribunals in the Caribbean. From 2009 to 2011, Maurice taught a variety of law courses at the University of Technology in Jamaica, including discrimination law. He was outed as a gay man in 2011, soon after filing a lawsuit against Jamaica’s anti-sodomy laws.

He is featured in The Abominable Crime, a documentary about homophobia and anti-gay violence in Jamaica. Maurice received the inaugural David Kato Vision and Voice Award, which recognizes individuals who defend human rights and the dignity of LGBTI people around the world. Maurice is working with Jamaica’s largest LGBT organization, J-FLAG, and others to establish a permanent shelter (Dwayne’s House) for homeless LGBT youth who have been forced to live in sewers.

The event ran for twice as long as anticipated as the audience gave rapt attention to recollections which were perceptive, poignant and jubilant, and which embodied the mantra that the personal is political.